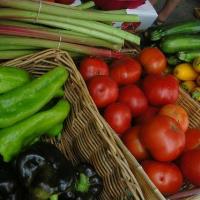 Scott Farabaugh and his wife, Christy, own and operate Blue Goose Farm in Nicktown, PA. They specialize in potatoes, and according to Scott, he has yet to find a way to cook potatoes that he hasn't liked! That's saying something...especially after you find that "not a day goes by that [they] don't eat potatoes!" Along with some Juliet tomatoes fresh off the vine, in summer.

The Farabaughs started farming in 2002. They were drawn to vegetable production because it is a more manageable way of farming: a smaller scale. They love that they live where they work and that, as Scott says, "Everyday I am working to make my small part on this earth better than I found it."
Practices
Blue Goose Farm is largely a "natural grown" farm. They also provide pasture for farm animals and grow half that acreage in hay, supplemented by a small amount of conventional grain, to feed their animals.