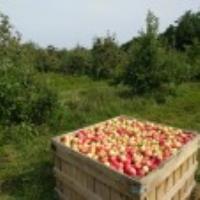 For 95 years, the spotlight at Kistaco Farm has been on their outstanding apples. Tim and Suzanne, along with their daughter Miranda, manage 235 acres and an on-farm market where they sell a variety of apples, their crisp, sweet apple cider, and other crops. This diversity on the farm is achieved by enjoying the diversity of the (equally frustrating and exciting) challenges that come with the job, says Tim.

Kistaco Farm's history dates all the way back to 1922, when Claude R. Yerger and Bertha Kimmel Yerger purchased 120 acres in Kiskiminetas Township. Shortly after they moved to the farm, they named it Kistaco Farm, which is an acronym derived from KISkiminetas Township, Armstrong COunty. Over the next 30 years they produced everything from milk, hogs, and eggs to fruits (especially apples) and vegetables. In 1950 Bill Hileman, who had worked on the farm from the age of 10, went into partnership with Mr. Yerger, and in 1957 married their youngest daughter, Lois Jean. By this time the farm had transitioned to strictly fruit and vegetable production. Through the 1960s and early 1970s Bill and Lois Jean Hileman took the business from wholesale to direct marketing, establishing their on-site market, and attending farmers’ markets in Heidelberg, Greensburg, and East Liberty. In 1986, shortly after graduating from Penn State, son Tim Hileman went into partnership with Bill. In 1996 Tim and his wife, Suzanne, became the owners of Kistaco Farm, and in 2015, started pasture-raising hogs and chickens once again!

The Hilemans hope you enjoy their products as much as they do! Tim's favorite treat is an apple pie, baked by Miranda or Suzanne. They are the apple experts, after all!
Practices
Using sustainable growing practices and integrated pest management (IPM), Kistaco Farm minimizes the use of chemical fertilizers and pesticides, and strives to grow bountiful, safe and healthy produce. Sustainable practices include good stewardship of their land and environment. All chickens and hogs are pasture-raised, as well.