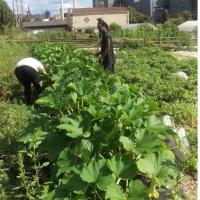 Grow Pittsburgh is a nonprofit organization (founded by 3 farmers) with the mission to demonstrate, teach, and promote responsible urban food production. They grow food on over an acre of urban production sites. Grow Pittsburgh also supports community gardens throughout Allegheny County and several Edible Schoolyards within the city. They sell the majority of their urban-farmed produce at reduced rates through farm stands in low-income areas. They joined PCFA in 2012, to assist with sales and distribution of the remainder of their produce. As a side benefit of PCFA membership, Grow Pittsburgh interns and apprentices have enjoyed visiting and learning from a variety of rural PCFA member farmers. For more info about Grow Pittsburgh, check out their website at: www.growpittsburgh.org.

Practices
Braddock Farms sits on the corner of Braddock and 10th Street, a highly visible portion of the main business corridor, and is set against the backdrop of the borough’s last remaining steel mill. In 2006, Braddock Mayor John Fetterman approached Grow Pittsburgh to develop an urban farm in the borough, and Grow Pittsburgh broke ground that summer. Beforehand, the farm was barren and dusty, the site of a demolished building on land owned by Allegheny County. Braddock Farms has now been in operation for over 13 years (since 2006). During the 2010 season, Braddock Farms expanded to include a neighboring lot and nearly doubled the farm’s size to slightly more than an acre. The site includes two hoophouses, a small greenhouse, and a shipping-container for a storage unit and office.